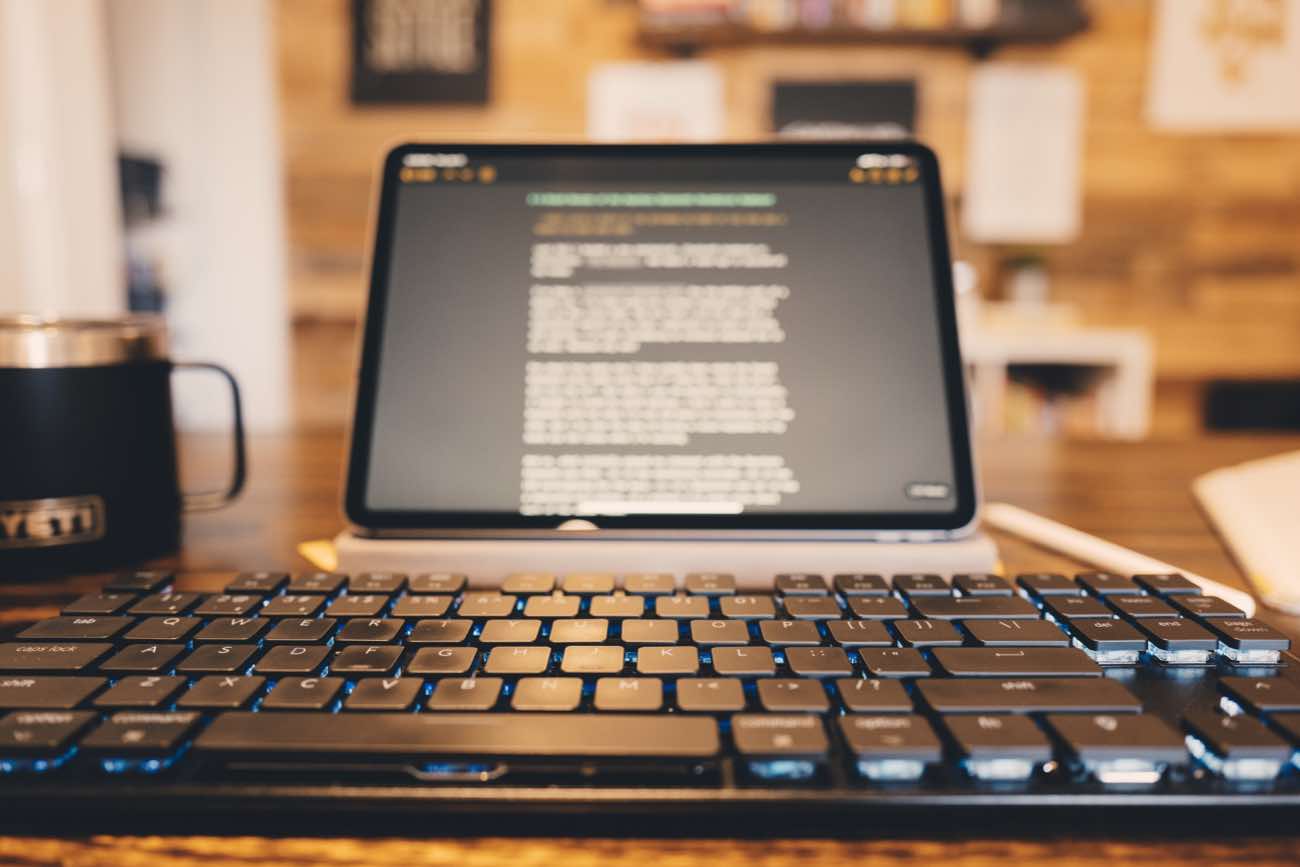 Last fall I helped Kickstart a new mechanical, bluetooth keyboard for my iPad: The Keychron. A few weeks ago it arrived at my house.

I’ve been a mechanical keyboard nerd for the better part of a decade now, using one clickety keyboard or another with my Mac since 2012. Now that I use the iPad for a significant amount of my work — especially my daily writing and editing — I’ve been considering a more fancy external keyboard for it as well. Because why not?

For about two years now I have simply been using the Smart Keyboard Cover (both with the 9.7” iPad Pro, then the 10.5”, and now the 11”). It is not a great keyboard by any means; but it’s been fine for me and I love the simplicity of just having it right there ready to go anytime I grab my iPad.

But when I saw the Keychron on Kickstarter, I thought it would be worth backing. While I don’t want to carry a keyboard with me when I’m out and about or traveling with the iPad. But I do like the idea of having a nicer keyboard at my home for the times when I’m using the iPad for writing while at my desk (such as at this very moment). 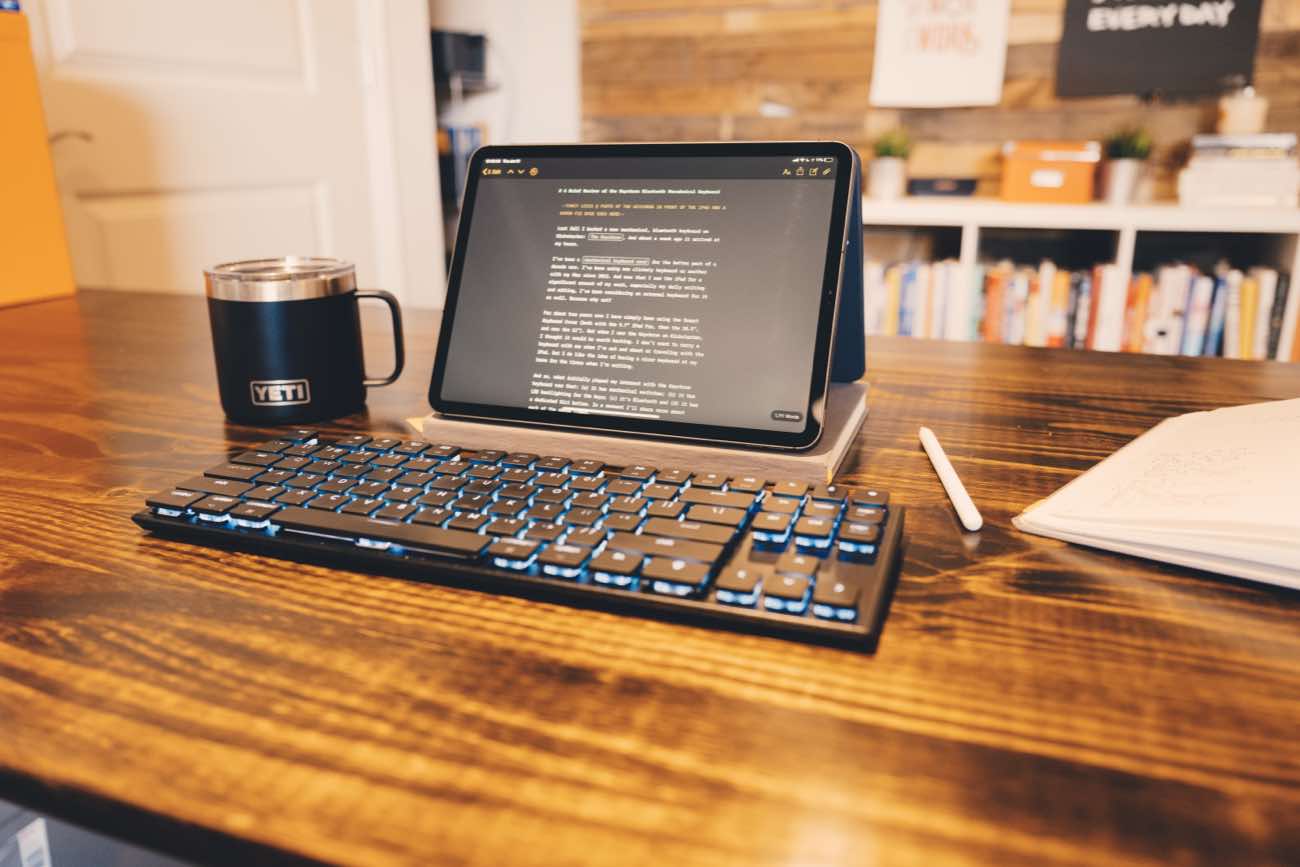 And so, what initially piqued my interest with the Keychron keyboard was that:

In a moment I’ll share more about each of the above items.

The Keychron uses low-profile blue switches. They are nice. While they are a bit less tactile they are also much quieter than my Filco Ninja with it’s Cherry MX blues, that’s for sure.

Typing on the keyboard feels like something right in the middle between my Cherry MX switches (which are big and bold) and the current bluetooth keyboards that Apple sells (which are thin and quiet). 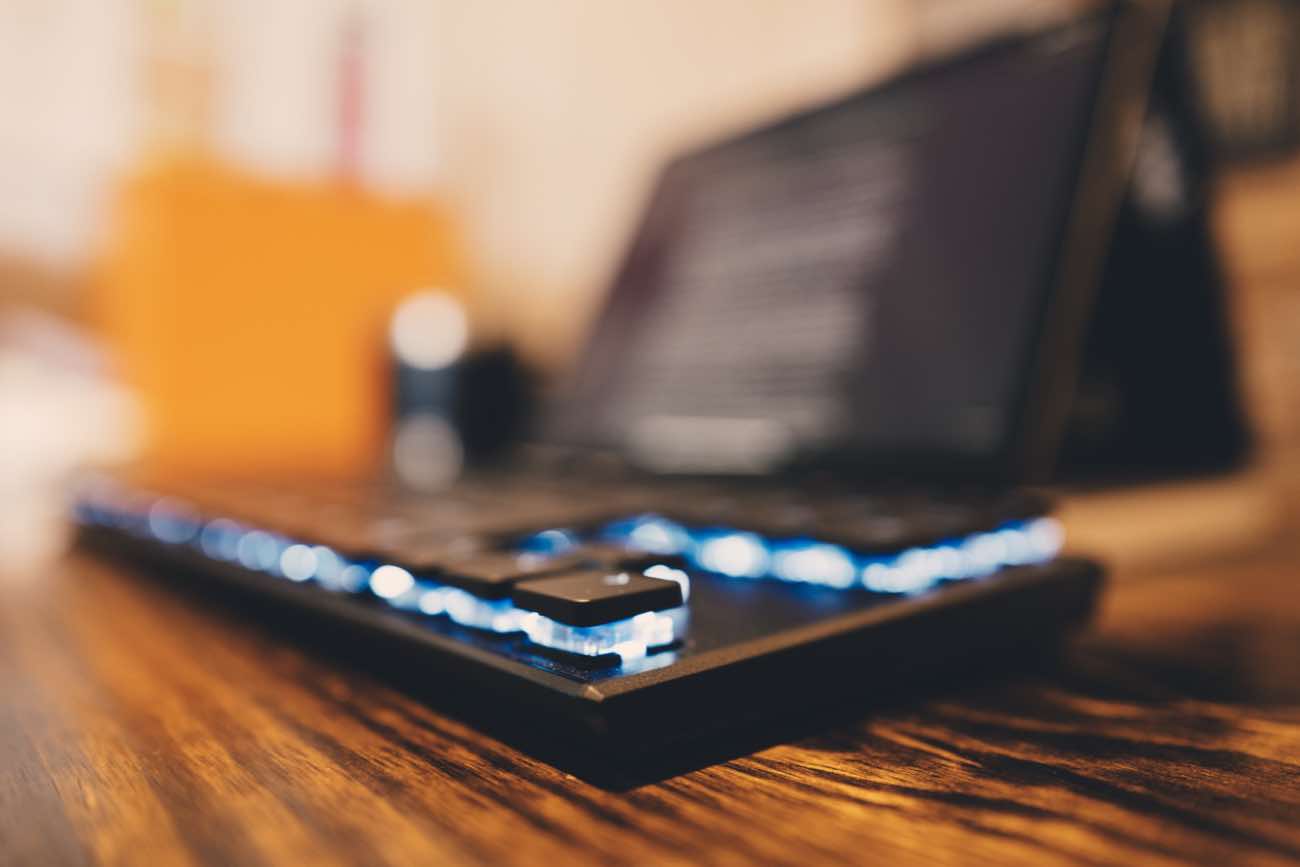 Another delightful feature of the Keychron is that each key is individually backlit. I opted for the simple blueish-white LEDs you see above, but there was also an option for full RGB colors which I did not get. I don’t want my keyboard to be a disco holiday light show, I just want it to be backlit.

There is an LED “Light mode” toggle button. But, oddly and nonsensically, it sits just to the left of the arrow keys.

This keyboard takes it’s light modes a bit too seriously.

The first few days I had this keyboard I accidentally toggled the light mode about every 100 words. Which is not great.

There are 10 different LED settings. Nine of which are some sort of fancy, wildly-distracting, party trick of light dancing around underneath the keys.

Which means that if you accidentally hit the light switch on the keyboard, suddenly the LEDs are bouncing around and flickering. And since there are about 10 different settings, you have to hit the button 10 more times to get back to where you were.

Another selling point for me with the Keychron is that it’s bluetooth. Moreover, you can pair it with up to 3 differnet computers / devices. And you can then switch between those devices using the keyboard. Pretty clever.

It also has a USB-C connection that it uses for charging and connecting directly to a computer if you don’t want to use Bluetooth.

But for some reason, the USB-C to USB-C cable I use to charge my iPad doesn’t work as a way to wire the Keyboard to the iPad. I can connect the Keychron using my USB-C to USB-A adapter that I bought from Apple.

So, to reiterate the awkward and nerdy wired configuration: Even though the iPad and the Keyboard both have USB-C ports, I have to use a USB-C to USB-A cable and then plug that in to with a USB-A to USC-C adapter. And the adapter has to be plugged into the iPad. If it’s the other way around, it doesn’t work.

Also worth noting is that the iPad will charge the keyboard’s battery when the two are connected via USB.

On my iPad I use both Spotlight and “Text to Siri” as a sort of quick-action, keyboard shortcut workflow.

Having the ability to bring up the Text to Siri interface without having to press and hold the power button on the side of the iPad makes things much nicer.

Alas, on the Keychron, the Siri button is Mac-only. This is a huge bummer and I wish they would have been more clear / upfront about it on their Kickstarter page as I thought the Siri button would be able to bring up Siri on iOS as well.

Apple’s Smart Keyboard cover (which I use and have attached to my iPad 90% of the time) will only prop up the iPad when it’s in the keyboard orientation. You cannot prop up the new iPads Pro in “media mode” the way you could with the previous generations and their Keyboard Cover.

Thus, for me to use an external keyboard like the Keychron along with the iPad means I have to have the keyboard portion of the keyboard cover sprawled out, sitting in front of the iPad and just behind the bluetooth keyboard. Ugh.

Now, I’m not a victim here; there are some workarounds for this. I could buy an iPad stand (the Twelve South Compass is awesome). Or I could also buy another case that lets you prop up the iPad, and then use that case when I’m using the external keyboard.

There’s also a partial workaround using the keyboard case I already have, but it only works if the iPad is on a rough-ish surface. You can flip the keyboard cover around like an “A Frame” and prop the iPad up that way. But on my desk, it just wants to slide open.  As you may have noticed from the photograph at the top of this article, my current solution has been to put the iPad on top of a used Baron Fig notebook. It’s not ideal, but it works for now I suppose. Shrug emoji. 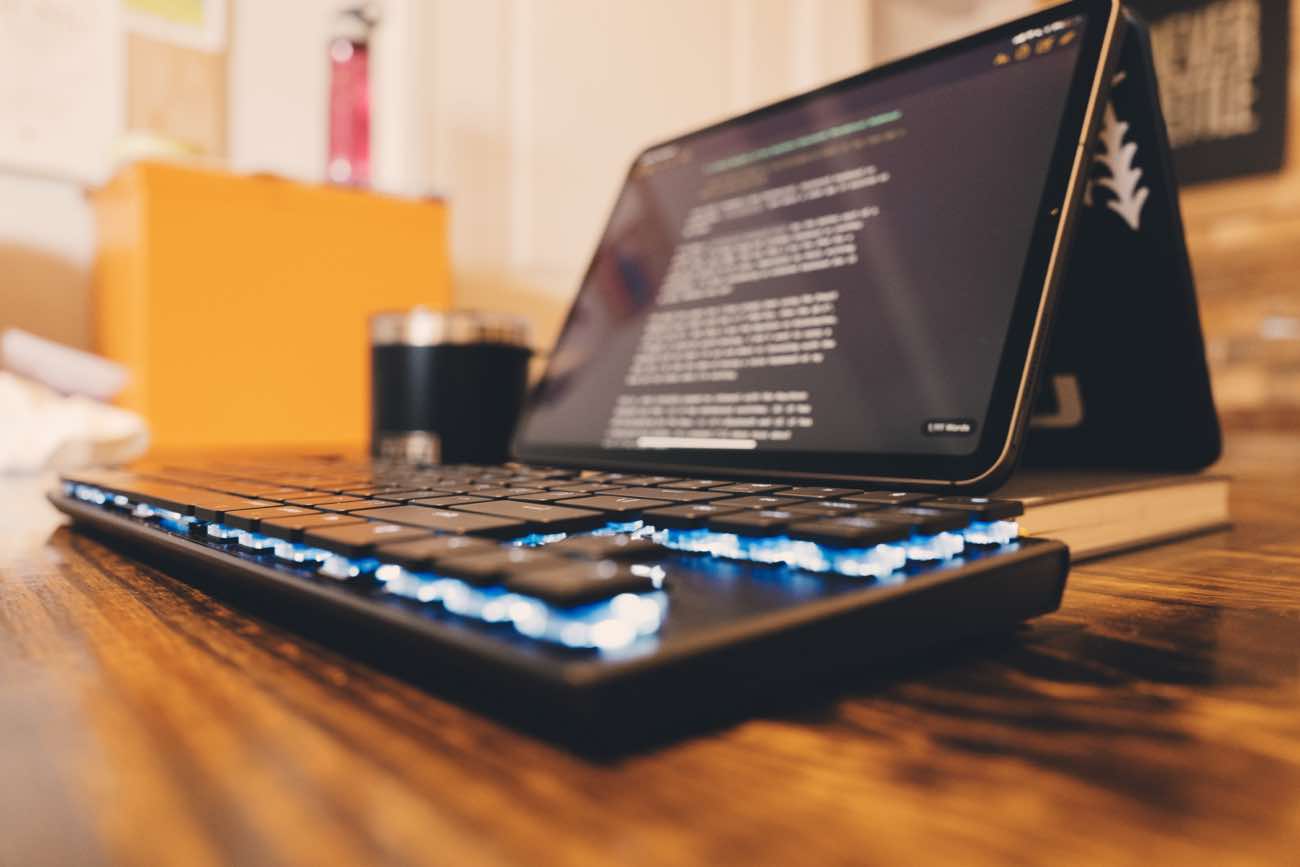 I’m sad to say that after using the keyboard for a couple weeks my current feeling is that it is less than the sum of its parts. It’s a beautiful and well-made keyboard, and the more I use it the more it’s been growing on me. But for whatever the reason, it’s not delightful to use. And if you’re going to have a big, noisy keyboard, it ought to be nothing if not delightful.

Now the question remains: Do I keep using it because I’ve got it; bust out the Apple Extended Keyboard II that I’ve had in my office for 7 years; go back to using the Keyboard Cover that I’ve been using for a few years; or…. start further down this rabbit hole of bluetooth mechanical keyboards for the iPad?

A Brief Review of the Keychron Bluetooth Mechanical Keyboard for iPad