Gosh, it’s been about a year now since the 10.5” iPad Pro came out. I bought one right away, and it has become one of my favorite gadgets of all time.

The iPad Pro (with iOS 11) is not like the other iPads. In fact, it feels to me like what the iPad was meant to be all along: Fun, powerful, versatile, and not annoying.

It’s the “not annoying” part that has finally come around. The iPads of the past have always been fun and versatile and powerful to an extent. But they also have always had certain limitations that brought about frustrations at times.

Thanks mostly to iOS 11, the iPad is fun, powerful, and versatile. Full stop.

As you may know, on Monday Apple is kicking off their annual conference: WWDC.

I’ll be out there in San Jose for a few days going to live podcast events and meeting up with my fellow Apple nerd friends. And, needless to say, I’m excited about what Apple will announce on Monday at their big keynote event.

In conjunction with the jumbo-sized Baron Fig notebook, my iPad has become a regular part of my every day creativity and productivity.

Even though I have an iMac with a fun and clicky keyboard at my desk, I find myself doing nearly as much work from the iPad as from my Mac. This is thanks entirely to a few things that, up until last year, really didn’t exist on the iPad.

Obviously, there is iOS 11 (“The iPad Release”) with its side-by-side app views, drag and drop, and, of course, the Files app itself with its system-wide integration which has been a huge game changer. (I’ve got a whole other story about how Dropbox has basically become obsolete for me, but we’ll save that for another time.)

And then, there are the apps I use most: Ulysses and Things. Both of which are world-class on the iPad (especially so with the most recent updates to Things 3.6 and Ulysses 13.)

All that said, today I wanted to share a bit about my current iPad setup so that if anything changes next week, there’d be a benchmark to compare against. 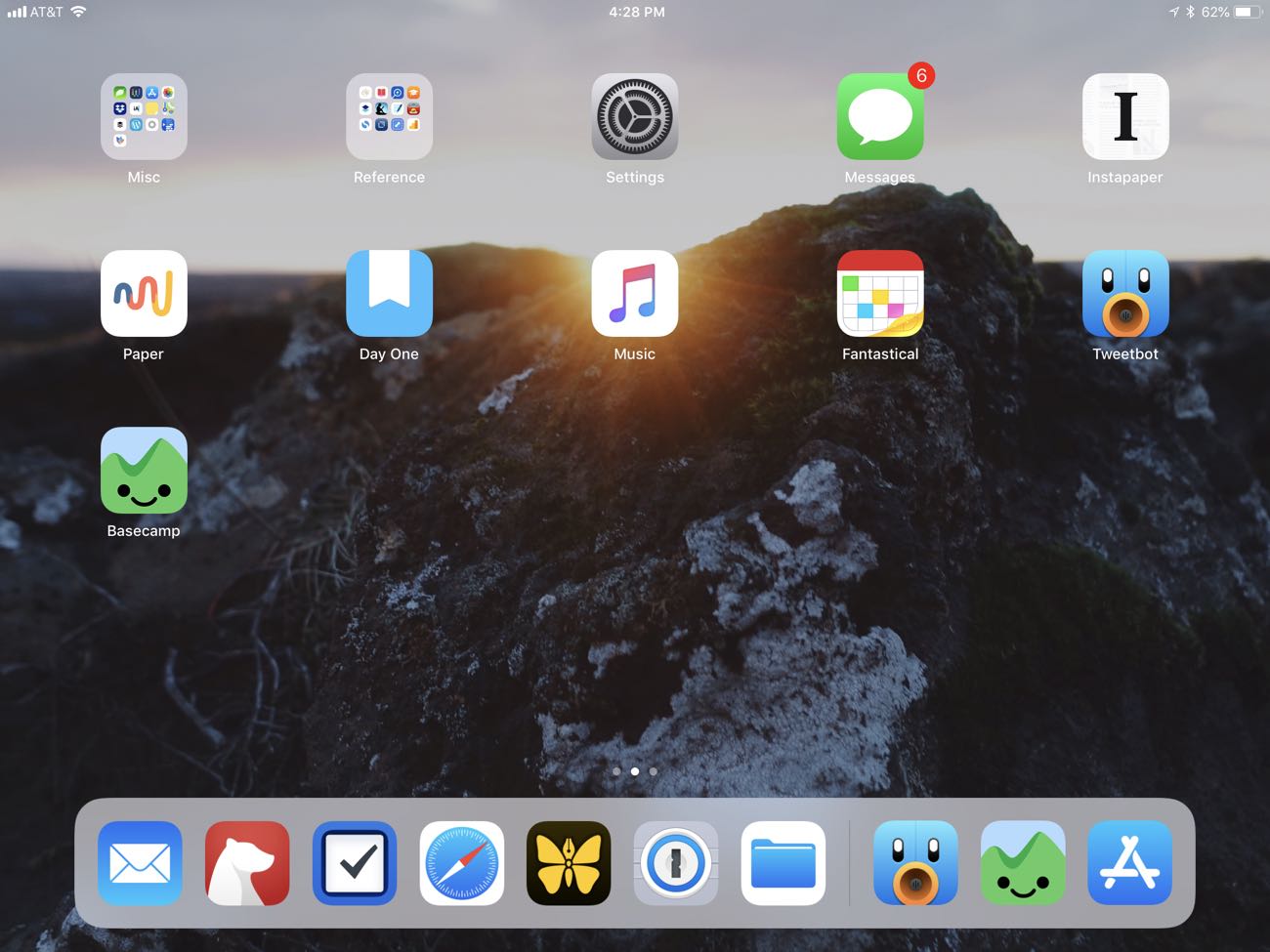 Hardware-wise, I use one of Apple’s smart keyboard covers with my iPad. It’s a pretty great keyboard — it’s just fine to use for typing, and I love that it can also fold back behind itself to prop up the iPad, and it easily pops off the side if I want to use the iPad strictly as a tablet.

As for apps, here’s a list of all the apps I use on my iPad the most (not including Ulysses or Things which I already mentioned above).

I can’t wait to see what Apple has up their sleeve on Monday for iOS 12. One thing I’d love to see would be keyboard shortcuts for the share sheet (which is something that Michael Rockwell mentioned about a week ago). It’d mean being able to save a web page to Instapaper or add a URL to Things through a keyboard shortcut rather than through a few taps.

At some point the thought does become: why not just use a laptop?

There are a few things here and there that would be awesome on an iPad. But what is also so great about the iPad is how you can pop off the keyboard and use the device like a tablet. Rotate it into portrait mode and read from it. Draw on the screen. Drag and drop things. Build-in internet connection anywhere.